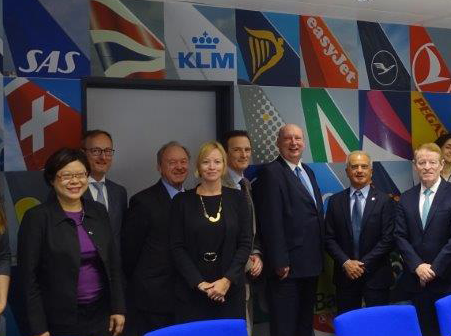 During the meeting, Black detailed the challenges facing regional airlines in North America, in particular focusing on the growing pilot shortage. She explained that aspiring pilots in the United States are often “reliant on the Bank of Mom and Dad” to finance their training, which “bars entry for those without access to wealth.” This is further complicated by the barriers to financial aid faced by student pilots, she said.

“In Canada and the U.S., flight training institutions are not recognized as post-secondary education and therefore candidates are restricted from government grants and loans,” Black said. “In the U.S., ceilings on student loans preclude financing the entirety of aviation training even for those in collegiate programs.”

Black noted that many meeting attendees were surprised by how hard North American regional airlines have been hit by the pilot shortage, not realizing the extent to which service had been disrupted and that aircraft are parked due to the shortage.

Following the meeting, the group issued a joint statement. “Participants noted the importance of the airline industry internationally as a key driver of the global economy, with more than 3.6 percent of global GDP and 66 million jobs worldwide supported by aviation,” the leaders stated. “The leaders agreed that the sharing of best practices has helped lead to high levels of safety worldwide…

“The group also discussed initiatives to attract talent into the industry to address growing, global workforce demands and ensure longterm sustainability, and to enable the broadest range of the world’s population, such as women, to access airline industry careers. The leaders additionally affirmed their commitment to providing leadership on the key issues of safety, security and the environment going forward … The airline associations found the dialogue and exchange immensely helpful and have agreed to meet annually in the future.”