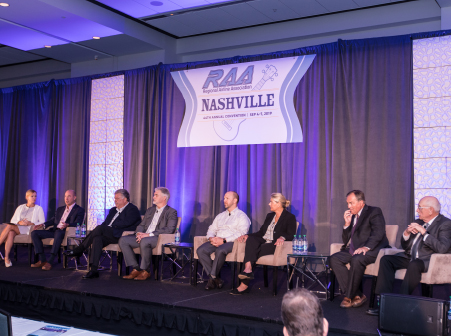 NASHVILLE—Leaders of North America’s regional airlines expressed optimism about the future of the industry, citing the strong interest mainline carriers have in partnering with regionals to extend networks via quality, seamless products offered by regional operators.

“I’m very optimistic,” Republic Airways CEO Bryan Bedford said at the first-ever CEO panel at an RAA Annual Convention. “I sense mainline partners’ optimism on wanting to continue to grow. The discussion is now much more on the quality of the product and the seamlessness of it, and that forces us to do better.”

The pilot shortage remains a challenge for the industry, but RAA has had great success in putting the issue front and center and regional airlines have offered compelling solutions, such as Republic’s LIFT Academy, which recently celebrated its first anniversary, Bedford and other panelists said. “We see flight schools are full,” Bedford said. “The first step was building awareness that there is a pilot shortage. I think that’s a box we can check. We can see the hard [lobbying and advocacy] work of the last four years paying off.”

But he cautioned that regional airlines “shouldn’t rest” on taking on the pilot shortage. RAA President and CEO Faye Malarkey Black added: “Anybody who thinks the pilot shortage is over has not looked very closely at the data.”

“We’ve got to continue to plant seeds and get the message out to all corners of the country that this is a viable, achievable career to become an aviator,” RAA Chairman and Trans States Holdings President Rick Leach said.

Ankit Gupta, vice president of domestic network planning for United Airlines, noted that after United had gone through a period where its market share shrank from 22% to 16%, it introduced a growth plan in 2016 and ensured that regional airlines were integral to the strategy. “Almost half of United departures are with regional aircraft. And yet while people had thought of us as the biggest player in the biggest cities, we hadn’t been considered that way in smaller cities. We’re aiming to rectify that,” he explained.

As the regionals then brought more feed to the bigger hubs, the mainline operations were able to grow too. “Regional operators provide the access, then grow and get to the point where we can deliver mainline services,” Gupta said. “International flows are important too, from the hubs to the regional destinations.”

Leach said that regional airlines “allow mainline airlines to extend their reach without increasing their risk,” adding: “We offer a quality product to our partners that allow them to serve markets they otherwise wouldn’t be able to serve.”

The amount of regional flying United can do is, of course, restricted by scope clauses in the mainline carrier’s labor contract with its pilots. The latest talks on those rules is now under way at United.

Savanthi Syth, managing director-global airlines for Raymond James & Associates, believes that there will be few changes during this round of discussions.

“Looking at United from the outside, though, I feel that the decision to operate the CRJ550 [a 50-seat, multi-class model with its own type certificate based on the Bombardier CRJ700 airframe] has given them that little bit more wiggle room to address the regional market. There’s a real opportunity there,” Syth said.

“For our pilots,” Gupta explained, “what they care about is job retention and how they maximize the pilots’ incentives and benefits. On our side, we’ve had to think about how to maximize our existing scope. And over the last couple of years we have shown that the regionals can work alongside the mainline. The answer was a 50-seat, 2-class CRJ, namely the CRJ550. We are at a disadvantage [compared with the other two big majors] as we have more 50-seaters. And I would say that Rick Leach [of Trans States Holdings] should get a shout out for coming up with this 50-seat product, which works within our scope clause and provides a dual cabin in places where we need it the most, such as Chicago and New York.”

He continued: “These passengers are going internationally, so this will help. Currently, to transfer to a 50-seater from a long-haul flight when you’ve paid, say $5,000, it’s not such a pleasant experience.”

Gupta reported that United expects the first of the CRJ550s to arrive in the autumn. They will be operated by Trans States Holdings subsidiary GoJet Airlines.

The CRJ550 is “one of the most fascinating innovations in this [regional] space in years,” Airlines for America (A4A) Chief Economist John Heimlich said.

Bill Swelbar, chief industry strategist at Delta Airport Consults, does not believe older-model 50-seat RJs are going away any time soon, either, as the industry has found ways to use those jets. However, he does think that some airports to which those aircraft fly could be in trouble. “I do believe we are going to lose some airports along the way, although not the same number that we originally thought,” he commented.

“Airports need more infrastructure” Swelbar said. “92% of capacity deployed in this country touches a large hub airport. Is there going to be space for connections from the smaller markets to continue 10 years from now? I know quite a few medium-sized airports that could absolutely support service to a large hub airport. Then there are non-hub airports which depend on the connectivity from a large hub airport. At some point, somebody’s going to get crowded out. There are a few hubs out there that are scalable, but I really think airport infrastructure is the most important small community issue today.”

“I’m very optimistic about the regional airlines over the next 10 years,” Cape Air President Linda Markham said. “I think we’re going to see more technology come into the industry, like electric aircraft. It’s not far away and someone is going to do it.”—Bernie Baldwin and Aaron Karp