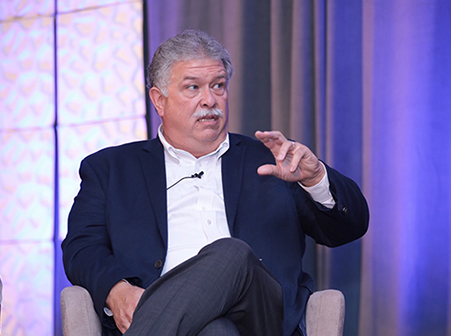 NASHVILLE—There has been a tangible change in the way the pilot shortage is discussed and the problem of too few aviators, which has been a major issue for the regional airline industry for years, is being approached, RAA Chairman and Trans States Holdings President Rick Leach told the 44th Annual RAA Convention here Thursday.

In a Fireside Chat hosted by RAA President and CEO Faye Malarkey Black, Leach detailed the progress RAA and the industry has made in the last five years. Whereas five years ago, the problem was often not even acknowledged, there is now widespread acceptance of the shortage and the need to do something about it. “What we can surely say is things have changed since we first started talking about this on Capitol Hill,” Leach said. “We really see folks on the Hill say, uniformly, that a pilot shortage does exist and it is impactful. And a lot of folks are saying, what can we do to help?”

This has happened because “the industry has been very active in responding to the challenge,” Leach said. “The industry has stepped up in so many ways. We’re reaching out in ways we’ve never done before. We’re seeing material affects from all this.”

All of the lobbying, outreach and programs implemented by regional airlines to address the pilot shortage “obviously comes at a great cost,” Leach conceded. “But the industry is doing what we need to do to put quality aviators in our cockpits. We’ve got to continue this outreach. We’ve got to get the word out that the industry is alive and well and it is a great career for pilots.”

Leach noted that he, other RAA board members and Black met with  U.S. Transportation Secretary Elaine Chao in Washington, D.C. this past May. “It was sort of refreshing,” he said. “She acknowledged there was a [pilot shortage] problem and she had all of her key stakeholders there, including the then-acting FAA Administrator Dan Elwell. She brought the right people together and gave us access and listened intently. She realizes there is large issue [regarding the pilot shortage] and something needs to be done.”

One avenue taken by RAA, which Chao agreed was a good idea, is for the regional airline industry to engage with the Departments of Education and Labor, as well as the Department of Transportation, to discuss education policy changes that could help more young people have access to pilot career pathways. A higher education bill being worked on in Congress could include provisions that make it easier for aspiring pilots to access federal student loans, helping to ease the high financial burden of achieving an ATP license needed to become an airline pilot, according to Leach and Black.

“We’ve got this amazing career, but the path to get there is just too hard, too expensive,” Leach said. “It makes folks say the path is too difficult, too steep to climb. The cost to achieve that career as a pilot is very, very high. We’ve got to find a way to get everyone, from all backgrounds, more access to funding. Doctors and lawyers have access to higher funding level [student loans]. Being a pilot becomes an elitist position [if those without means are excluded]. We’ve got to expand our reach [to people from all economic backgrounds], but if we can’t provide them a path to get there, then we are wasting our time with all of our outreach.” –Aaron Karp