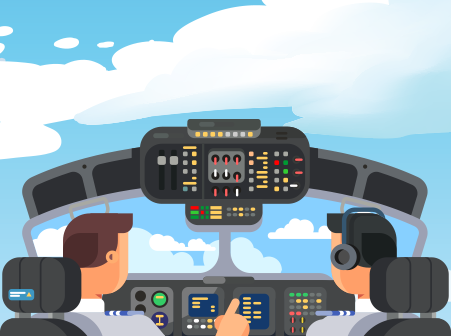 The 2018 Pilot Source Study (PSS), a follow-up to PSSs conducted in 2012 and 2015, affirmed the findings of the earlier studies: Pilots on average performed better in regional airline training programs if they were closer in years and flight hours to their graduation from flight training programs than those with more years and hours.

“Pilots with fewer than five years between graduation and hire had a higher completion percentage and a lower extra training average” in airline training programs, said Guy Smith, professor emeritus at Embry-Riddle Aeronautical University and the principal PSS researcher.

Similarly, pilots with a Military ATP (750 hours of flight time) or an Institutional ATP (1,000 hours of flight time) had a higher completion
percentage and a lower extra training average than those with 1,250 or more hours. Pilots with 1,500 flight hours performed significantly worse in airline training programs than those with fewer hours, the PSS found.

Data was collected from the five regional airlines that were most active in pilot hiring from September 2015 to November 2018. Five research teams collected 9,776 pilot records and analyzed these data.

Smith explained that the results, perhaps counterintuitive on the surface, make sense when one considers that those with fewer flight hours often have had more structured training than those with more flight hours. Pilots with ATPs and 750 flight hours entering airline training programs are coming from the military, where training is highly structured. They do far better than pilots with ATPs and 1,500 hours, who likely have accumulated hundreds of hours of flight time in less disciplined environments.

Given the FAA regulation, put in place in 2013, requiring pilots to gain 1,500 flight hours before entering airline training programs, prospective airline pilots now have to navigate “the gap” from when they graduate flight training programs to when they secure their ATP, Smith explained, asking: “How do they fill the hours?”

“Essentially the number of new hires needing extra training [in airline training programs] has doubled since” the 1,500-hour-requiement was put in place, Smith said. “How pilots fill the time in the gap is critical.”

Smith emphasized that he is not advocating the number of hours that should be required—or not required—before becoming an airline pilot. But he said the PSS findings show “total hours are not determinative” and that “disciplined or structured” training is more critical than a simple accumulation of flight hours.