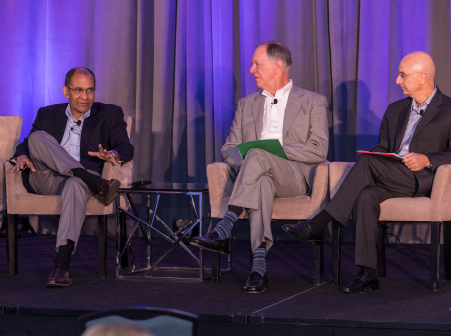 NASHVILLE—When it comes to safety, it should be a joint effort with airlines, government agencies and manufacturers working together to be guarantors of industry standards designed to protect all stakeholders as well as the flying public, according to a panel of experts who spoke at the RAA Convention.

“Data is the root of analysis,” said former FAA Administrator Randy Babbitt, noting that the collection of data provides guidance to regulators in setting safety standards.

Another key element for safety has been the FAA’s  Aviation Safety Action Program (ASAP) that encourages carriers and repair stations to voluntarily report safety information that may be critical to identifying situations or occurrences that could lead to accidents. It is a way to resolve issues through corrective action rather through discipline or punishment.

The FAA, as well as the National Transportation Safety Board (NTSB), relies on airlines and manufacturers to provide much of the expertise they need. The FAA’s Organizational Delegation Authority enables aircraft manufacturers to act as an agent on behalf of the FAA to test a procedure or a piece of equipment. Babbitt pointed out that the FAA has about 1,200 engineers compared to some 40,000 employed by Boeing.

“One of the reasons we evolved ODA is because regulators couldn’t keep up with the new technology,” said former NTSB Chairman Christopher Hart. Congress pushed ODA because it took the FAA so long to get an aircraft certificated otherwise, he added.

Hart said Republic’s LIFT Academy is a good example of pilots being trained with the same type of discipline that is already used in the military. ”I’m glad to see LIFT-type programs that are looking to replace that military-type discipline on the civilian side,” he said, adding that simulator-time should not be looked down upon. “I’ve seen pilots with thousands of hours come out of a simulator sweating because it’s so realistic,” he said. —Sandra Arnoult